This Blog topic was prompted by comments in Kevin O'Brien's excellent Blog regarding 'thinking about orthodontics'. Kevin was discussing evidence-based care and what we know versus what we don't know and how to apply our knowledge, skill and experience as clinicians in the treatment of our patients. Many suggestions were made about what we do and don't know but two comments in particular claimed that Passive Self-ligating (PSL) brackets were superior to conventional brackets during initial alignment in non-extraction treatment. I have also seen other claims in Facebook study clubs where the clinician states that in their experience, PSL brackets are superior for space closure in extraction cases (a future Blog topic). So is this evidence or their opinion and what is the evidence if any?


In 2006 I conducted the first prospective study comparing PSL brackets with conventional brackets in the lower arch in non-extraction cases. This was published in The Angle Orthodontist and I found that the PSL bracket was no better during initial alignment than a conventional bracket. Another non-extraction study published in the American Journal of Orthodontics in 2010 found there was no difference between PSL or Active SL brackets. Based upon this evidence in clinical trials this refutes the claim that PSL brackets are more effective in non-extraction cases during initial alignment. If we then include the evidence from extraction cases as well, this was summarised very nicely in another article in the American Journal of Orthodontics in 2014 where the data was plotted graphically (shown below) in a meta-analysis. The vertical line at zero ('0') represents no difference between brackets and the purple squares are the individual studies. What we are most interested in are the large green diamonds which represent the results combined together and as they overlap the zero line, this indicates there was no difference between any of the bracket types tested across the various studies during initial alignment. It seems the evidence is quite compelling that there is no advantage in PSL or ASL brackets over conventional brackets during initial alignment. 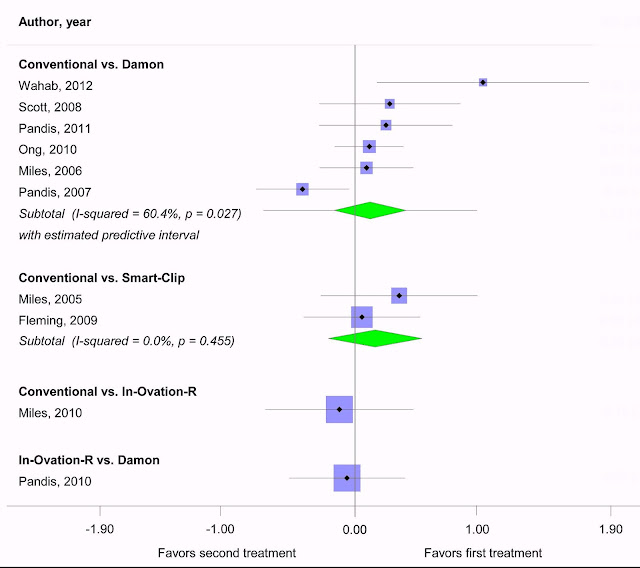 As the evidence clearly shows there is no difference between brackets, the choice of bracket then comes down to the personal preference of the clinician. BTW if you are interested in evidence-based orthodontics then I highly recommend subscribing to Kevin's Blog at http://kevinobrienorthoblog.com/